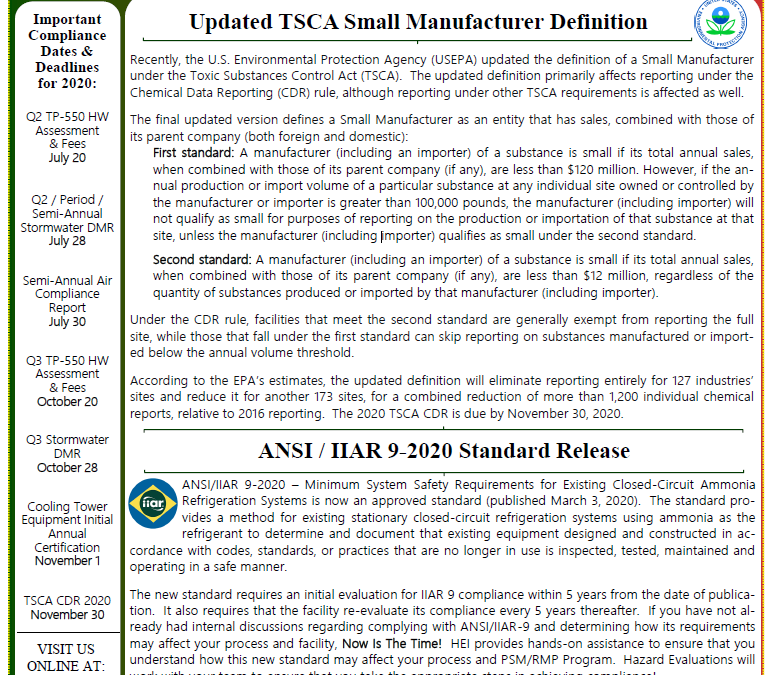 Under the CDR rule, facilities that meet the second standard are generally exempt from reporting the full
site, while those that fall under the first standard can skip reporting on substances manufactured or imported
below the annual volume threshold.

According to the EPA’s estimates, the updated definition will eliminate reporting entirely for 127 industries’
sites and reduce it for another 173 sites, for a combined reduction of more than 1,200 individual chemical
reports, relative to 2016 reporting. The 2020 TSCA CDR is due by November 30, 2020.

ANSI/IIAR 9-2020 – Minimum System Safety Requirements for Existing Closed-Circuit Ammonia Refrigeration Systems is now an approved standard (published March 3, 2020). The standard provides a method for existing stationary closed-circuit refrigeration systems using ammonia as the refrigerant to determine and document that existing equipment designed and constructed in accordance with codes, standards, or practices that are no longer in use is inspected, tested, maintained and operating in a safe manner. The new standard requires an initial evaluation for IIAR 9 compliance within 5 years from the date of publication. It also requires that the facility re-evaluate its compliance every 5 years thereafter. If you have not already had internal discussions regarding complying with ANSI/IIAR-9 and determining how its requirements may affect your process and facility, Now Is The Time! HEI provides hands-on assistance to ensure that you understand how this new standard may affect your process and PSM/RMP Program. Hazard Evaluations will work with your team to ensure that you take the appropriate steps in achieving compliance!

Waters of the United States and Navigable Waters Updates

On April 21, 2020, the U.S. Environmental Protection Agency (USEPA) and the Department of the Army (Army) published the Navigable Waters Protection Rule to define “Waters of the United States” (WOTUS) in the Federal Register. For the first time, the agencies are streamlining the definition so that it includes four simple categories of jurisdictional waters, provides clear exclusions for many water features that traditionally have not been regulated, and defines terms in the regulatory text. Congress, in the Clean Water Act, explicitly directed the Agencies to protect “navigable waters.” The Navigable Waters Pro-tection Rule regulates traditional navigable waters and the core tributary systems that provide perennial or in-termittent flow into them.

In this final rule, the agencies interpret the term ‘‘Waters of the United States’’ to encompass:

The rule also clarifies those waters that are specifically exempt including groundwater, ephemeral features that flow only in direct response to precipitation, and ditches that are not traditional navigable waters, prior con-verted croplands, and waste treatment systems, among others. The WOTUS updates may affect permitting scenarios, and requirements for spill or emergency response plans. The recently finalized rule will have
an impact on those affected by Clean Water Act permitting and requirements.

On March 26, 2020, the U.S. Environmental Protection Agency (USEPA) released an Enforcement Discretion Letter for noncompliance in civil matters resulting from the COVID-19 pandemic, which will remain in effect until August 31, 2020. The letter states that, if due to the COVID-19 pandemic compliance is not reasonably practicable, facilities with environmental compliance obligations should: 1. Act responsibly under the circumstances in order to minimize the effects and duration of any noncompliance; 2. Identify the specific nature and dates of the noncompliance; 3. Identify how COVID-19 was the cause of the noncompliance, and the decisions and actions taken in response; 4. Return to compliance as soon as possible; and 5. Document the information, actions, or conditions specified in 1 through 4.

Each year, dozens of workers in the United States die from heat illness, sometimes referred to as heat stress, due to working in extremely hot environments. In 2011, OSHA launched the Heat Ill-ness Prevention Campaign to raise awareness and educate employers and workers on the dangers of working in hot environments. This campaign highlighted three key words to keep workers safe: Water, Rest, and Shade. Workers can be exposed to hot or humid conditions from a variety of sources. Working outdoors may first come to mind, but working indoors around heat-producing machinery or processes such as foundries, ovens, boiler rooms, or steam applications can also produce heat illness. Types of heat illness include heat stroke, heat exhaustion, heat cramps, and heat rash. Common first aid practices include removing the affected worker from the hot or humid area, providing cool beverages (preferably water), and cooling the worker down by ap-plying cool water or cold compresses to the body. Under Section 5(a)(1) of OSHA’s General Duty Clause, employers are required to provide employees with a place of employment that is “free from recognizable hazards that are causing or likely to cause death or seri-ous harm to employees.” This clause includes heat-related hazards. In addition to implementing engineering controls such as air conditioning, fans, and ventilation, major steps that employers can take to prevent heat-related illnesses include providing water, rest, and shade. Acclimation periods for new or returning employees who will be assigned to work in the heat or hot environments have also proven effective in reducing the amount of heat-related illnesses.