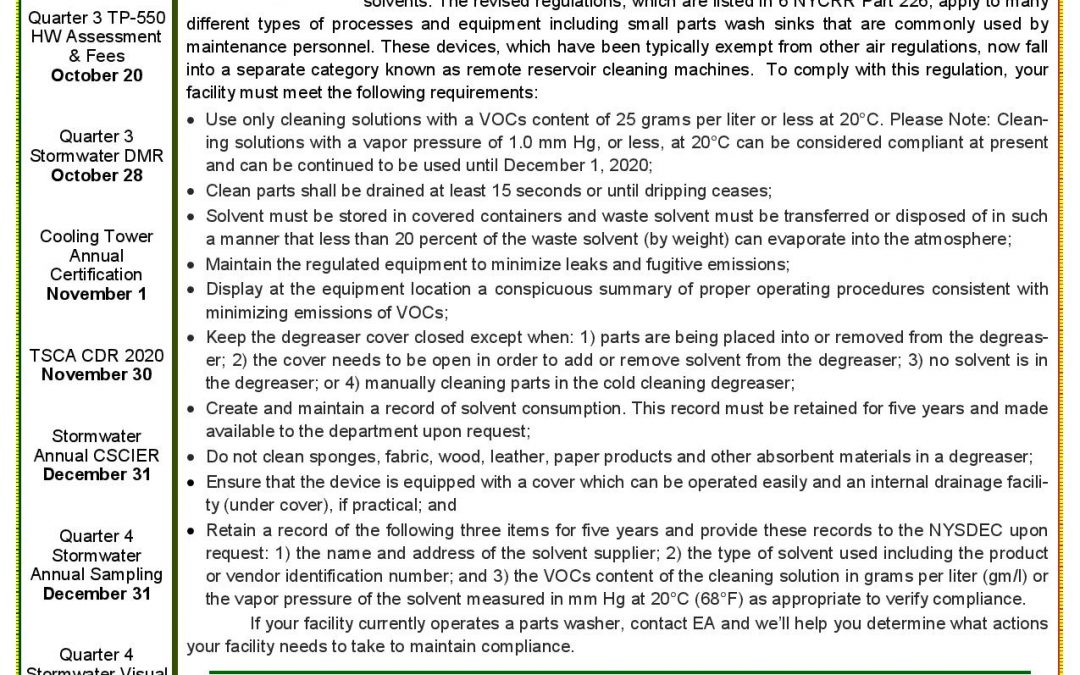 The New York State Department of Environmental Conservation (NYSDEC) recently
revised its regulations pertaining to solvent cleaning and the use of industrial cleaning
solvents. The revised regulations, which are listed in 6 NYCRR Part 226, apply to many
different types of processes and equipment including small parts wash sinks that are commonly used by
maintenance personnel. These devices, which have been typically exempt from other air regulations, now fall
into a separate category known as remote reservoir cleaning machines. To comply with this regulation, your
facility must meet the following requirements:

If your facility currently operates a parts washer, contact EA and we’ll help you determine what actions
your facility needs to take to maintain compliance.

Hazardous waste generators in New York State (NYS) are generally well aware of the fact that as an authorized state, NYS is required to have hazardous waste regulations at least as stringent as the United States Environmental Protection Agency (USEPA). However, what generators may not be aware of is that following the effective date of USEPA’s Hazardous Waste Generator Improvements Rule (GIR) in May 2017, NYS has yet to fully accept the full GIR regulations, as the state continues to revise and update their own regulations. Generators in NYS must not only ensure that they are complying with NYSDEC hazardous waste regulations, but also the more-stringent requirements of the USEPA’s GIR which are in effect (USEPA can enforce these requirements in NYS). Most of these more-stringent requirements affect large quantity generators (LQGs), but some do affect other categories of generators as well. Generators in NYS often assume that if they comply with the NYSDEC hazardous waste regulations, they are automatically in compliance with USEPA requirements; however, this is currently not the case. For instance, the GIR included a provision that LQGs must also develop and submit a Quick Reference Guide (QRG) when they update and submit their RCRA Contingency Plans to emergency responders and agencies. This requirement hasn’t been adopted yet by NYSDEC (although it is in the process), but because it is in effect at the federal level, it may be enforced in NYS. There are also several other aspects to the GIR that are currently in effect at the federal level that can still be enforced in NYS prior to NYSDEC’s adoption of the rule. This also works in the opposite fashion. There are some hazardous waste provisions that are less stringent at the federal level than state, which cannot yet be utilized by NYS generators. These include managing aerosol cans as universal waste, episodic generation reliefs, LQGs consolidating Very Small Quantity Generator (VSQG) wastes, and the 50-foot setback waiver for ignitable and reactive wastes. NYSDEC is adopting most of these provisions in some fashion in various phased packages of regulatory changes (see FedReg5 and FedReg6 packages on NYSDEC website). These changes also include reorganization and various clarifications as well, which are expected to aid in clarifying many generator requirements. If you require assistance developing or updating your contingency plan, or complying with an aspect of RCRA / NYS hazardous waste regulations, contact EA today.

ANSI/IIAR 6-2019 was recently established to define the minimum requirements for inspection, testing, and maintenance (ITM) applicable to a safe closed-circuit ammonia refrigeration system. The standard identifies what components should be inspected, tested, and maintained and how frequently the tasks should be performed. The standard should be incorporated into a Mechanical Integrity Program as recognized and generally accepted good engineering practices and OSHA is now using the document for reference during inspections. This document also provides several benefits for employers in eliminating certain grey areas surrounding the ITM that may be required, but also provides guidance on the Retention of Mechanical Integrity Records, as well as the acceptable frequencies for completing required tasks (i.e., annual inspection is occurring once per year in a time period of between 9 and 15 months with the maximum time period being 15 months for an annual task). These are important tools for operators of ammonia refrigeration systems to be aware of and how they may affect your PSM/RMP Program procedures and documentation. If you have not already had internal discussions regarding complying with ANSI/IIAR-6 and determining how its requirements may affect your process and facility, Now Is The Time! HEI provides hands-on assistance to ensure that you understand how this standard may affect your process and PSM/RMP Program. Hazard Evaluations will work with your team to ensure that you take the appropriate steps in achieving compliance!

The USEPA has revised the Chemical Data Reporting (CDR) requirements and has extended the deadline for
the 2020 reporting period to allow manufacturers and importers to review and incorporate the changes. The
deadline is quickly approaching and reports must be submitted by November 30, 2020.

Have you filed your Annual 209-u report yet?

NY General Municipal Law §209-u requires any business within NYS using hazardous materials during the previous year to report the presence of these materials to the chief of the appropriate fire department, fire corporation, or fire company having responsibility for fire protection at the storage address.